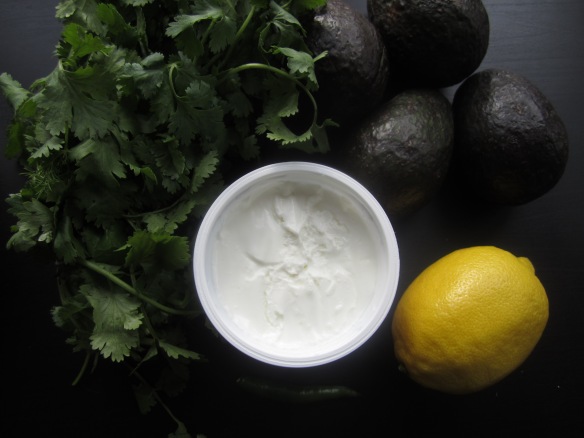 The bag of avocados had ripened.  I didn’t have a room full of hungry people, but it didn’t matter.  I dropped all my plans and did what any self respecting person would do.  I made guacamole.  And, I knew I could experiment a bit with this Mexican staple without worrying about disappointing a purist.  I worked with what I could find in the fridge.  I had lemons, not limes.  Leftover cilantro.  A chile pepper.  And some greek yogurt… Hmmm.

I got to work, scooping out the soft flesh of the avocados into a bowl, being sure to squeeze in the lemon juice to keep the beautiful green color.  This was going to be quick.  With a mince of a chile and a chop of cilantro, a grinding of salt and pepper, I had guacamole.  And it was good.  But, after a few heaping spoonfuls of thick, tangy yogurt, I had something different.  I grabbed a chip and dipped in.  The decadence of the avocado was accented by the bright lemon, the heat of the chili pepper and the fresh taste of the cilantro.  The yogurt kicked up the flavor even more with tang and made the texture light and creamy.  I could have stopped there, but, since I was alone, I tossed in a little minced garlic for some backbone.  This Mexican fiesta-for-one took a turn to the Greek Isles.  And it was good.  Pablo?  Meet Nikos.  Have some “Greek”-amole. 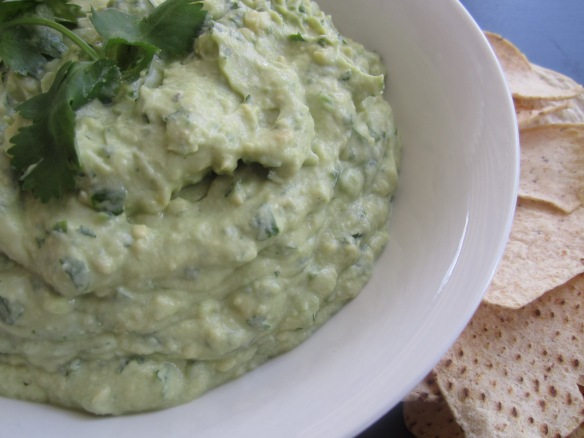 “Greek”-amole
4 Avocados
4 heaping tablespoons Greek yogurt (such as Fage)
1 cup chopped cilantro (most of one bunch)
1 small minced chile  (such as jalapeno)
1 Lemon
Salt/Pepper
1/2 clove minced garlic (optional)
Mash flesh of avocados with back of fork until smooth and mix with the yogurt, cilantro, chili, the juice of a lemon and salt and pepper to taste.  Combine with minced garlic, if using.
Serve with a bowl of your chips of choice (or a crudite)

2 thoughts on “Avocados and a Dream: “Greek”-amole”