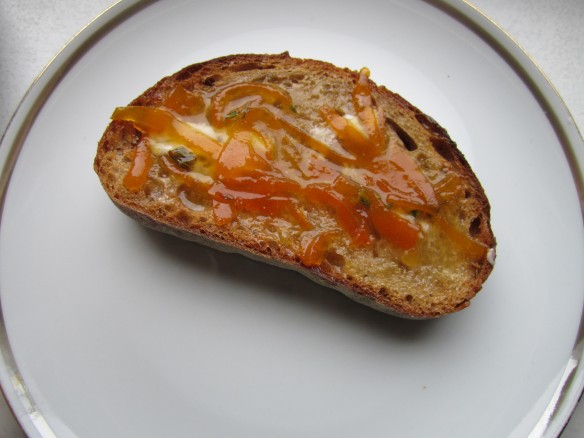 I wouldn’t call myself a jam maker.  But, when I saw a bowl of kumquats on the kitchen counter left over from my extensive photo shoot with kiwis (they didn’t make the cut), I knew I had to do something with them.  I have a love/hate relationship with kumquats.  One moment, I’ll eat one that is fantastically tart and bursting with sweet, citrus flavor.  Then, I’ll reach for another and I’m suddenly aware that I’m eating a miniature, oval shaped orange with its skin.  The tartness and pithiness practically slaps me across the face and I’m left feeling confused and alone.  I’m being a little dramatic.  What it boils down to is that I knew I’d be staring at that bowl of kumquats on the counter until they spoiled, the orange pile only slightly dented from the curious passerby.  I can’t stand watching a fruit or vegetable spoil.  I made marmalade.

Considering the fact that I’d never made marmalade, I thought it would be appropriate to consult some recipes to get a lay of the land.  The idea of something not “setting” or “jelling” correctly made me less inclined to wing it.  Like a kid in science class, I did learn something new in my findings as a novice jam maker.  What makes the marmalade “jelly-ish” for lack of a better word is natural pectin that comes from cooking the seeds and membranes inside of the fruit.  It’s almost as if kumquats and oranges need to be made into marmalade.  Perhaps, it’s their destiny.

Anyway, I started with a bowl of kumquats. 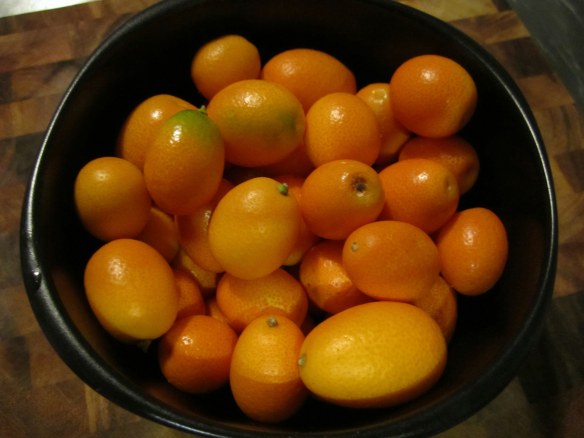 Preparing the kumquats for marmalade is the most labor intensive part of this whole endeavor, but it borders on meditative.  Like washing dishes.  (That’s what I keep telling myself.)  I suggest, perhaps, putting on a good album and silencing your phone ahead of time.  Once you get into the groove, your hands will get a bit sticky and you don’t want to answer phones with your elbow.

Note: I didn’t have cheesecloth, which is used to hold the seeds and membranes while soaking and cooking the mixture of rinds and sugar.  It was raining outside.  A tea ball did the trick.  (Although, I will be purchasing cheescloth next time I’m at the hardware store.)

I also found an abnormally large bag of thyme in the fridge.  Marmalade recipes often call for lemon juice but, since kumquats are pretty tart on their own,  I thought thyme would add a lemony, earthiness. 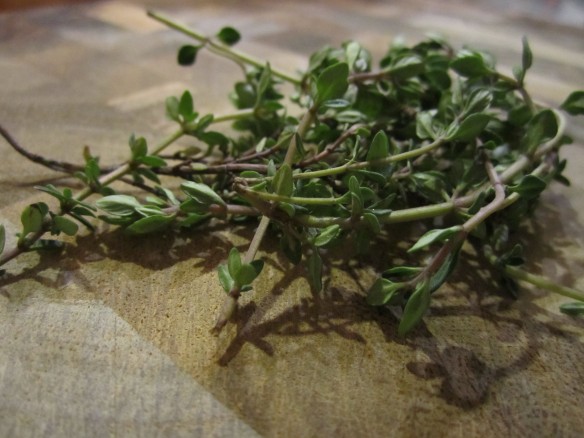 Once I got through the “meditative” prep and the kumquat mixture was cooking on the stove, a wonderful aroma filled the kitchen, and the color turned a gorgeous, deep orange.

And, like a caterpillar emerges from the cocoon, I saw marmalade.  Beautiful. 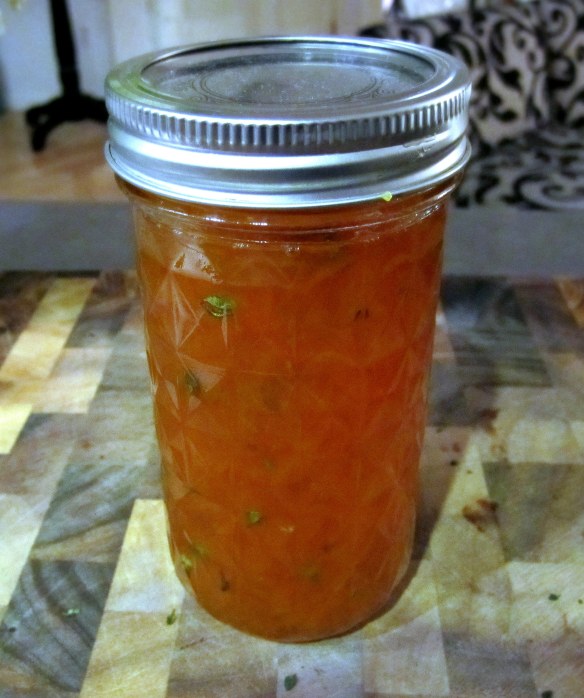 With a sharp paring knife, slice off the ends of each kumquat and cut in half, lengthwise.  Over a medium sized pot, take each kumquat half and squeeze out the juice with a rolling motion with your fingers, careful to catch any seeds.  The membrane should separate relatively easily from the rind.  Set the membrane and seeds aside in a pile.  Slice the rind in thin strips and put in the pot with the juices.

Fill the cheesecloth (or tea ball) with the membranes/seeds and fasten shut.  Place into the pot with the sliced rinds and pour in the water.  Cover and refrigerate for 8 hours or overnight.

Place pot with rinds and membrane/seed “package” over medium high heat.  Add sugar and stir to combine.  Once the mixture comes to a boil, give it a couple big stirs, then turn down to a high simmer.

Set your timer for 45 minutes and leave everything undisturbed without stirring, only monitoring the heat so the mixture stays at a constant, brisk simmer.  After 45 minutes, remove from heat and take out the membrane/seed “package” – if cool enough to handle, squeeze and scrape off any excess moisture into the pot.  Stir in thyme and let the mixture rest for 10 minutes.  Pour into a hot, sterilized jar or other container.  If not using a sterilized jar, marmalade can stay in fridge for about a week.

Enjoy on hot, buttered toast or a scone.